The Coastal Bend Groundwater Conservation District has 3 board positions up for election on November 08, 2022.  These board positions are for Precinct 2, Precinct 4, and At Large.  Contact the CBGCD office for more information.

The Coastal Bend Groundwater Conservation District (CBGCD or District) is a political subdivision of the State of Texas. In a confirmation election held on November 6, 2001, Wharton County voters approved the creation of the District, elected five Directors to the Board of Directors, and approved its authority to assess an ad valorem tax on Wharton County property owners.

The District boundaries are the same as the area and extent of Wharton County, Texas, however, on May 8, 2006, property owners from Colorado County, Texas, which does not currently have a GCD, approached the CBGCD Board of Directors to annex approximately 800 acres of their Colorado Co. property into the Coastal Bend District. Their request was approved by the Board of Directors on that same day. 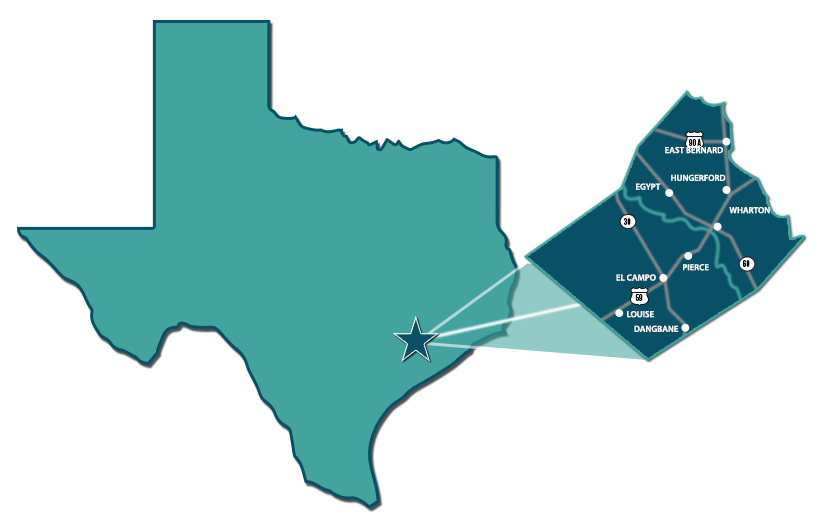 On December 2, 2002, the District opened its office in Wharton and the new General Manager, Neil Hudgins, began working to bring the District into operational status. On April 13, 2004, the board adopted rules that became effective May 15, 2004. The District office is currently staffed by Neil Hudgins and Jaime Bosch, and is generally open on weekdays from 8 am – 5 pm except when the staff must perform work away from the office.

The Board of Directors holds regular meetings, and the public is encouraged to attend. These meetings are normally held on the second Tuesday of odd number months at 8 a.m. at either the District Office, 109 E Milam, Wharton, Texas or at the Wharton County Extension Office located at 315 E Milam, Wharton, Texas. The Board Meeting Notices and Agendas are posted in the window of the Wharton County Courthouse Annex at least three days prior to the Board Meeting. Should circumstances require a different meeting time or place; the information will be included in the notices posted in the above-mentioned location. Members of the public may also obtain copies of the Agenda prior to the meeting by coming by the District Office or by FAX or email if requested. (See also Meeting Agendas page)